Verdict is in! KB is still a tiny little nugget. 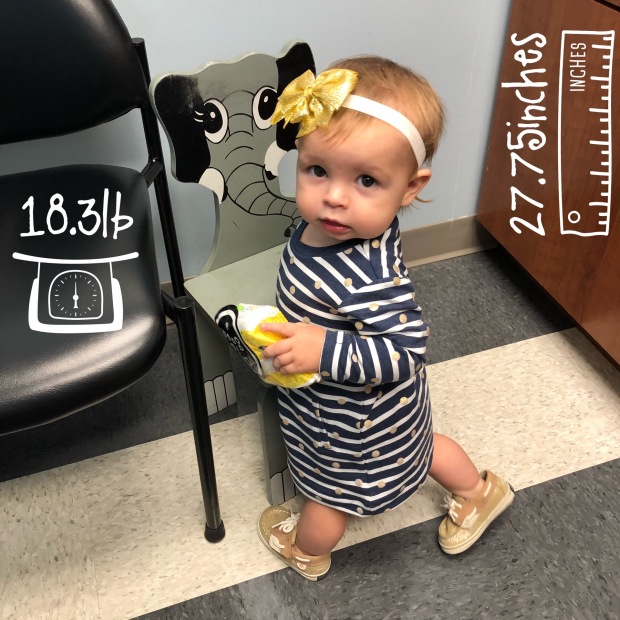 Little boo came in at 18.3lb (I was off) and 27.75inches! (I was close, but I kind of cheated because I had to try to measure her when we did her passport photo so I had a slight idea.) She’s in the 8th percentile for height and 33rd for weight.

Chris and I are not short, so not sure when this little sprout will bloom – but my mom said I was a slow and steady grower, too! The doctor told us  their height isn’t an accurate measurement of how tall they’ll be until their 2, so we will wait and see!

Kens did great at her appointment. She didn’t like the nurse and cried when anyone touched her, but she LOVED her doctor. She reached for her when she came in!

Complete disclosure: she really just wanted her computer 😂 but, she was very content on her lap once we wouldn’t let her have it.
Kensie may disagree, but her appointment went well and her doctor was very impressed with her coordination and motor skills! She said she has the social skills of a 15 month old but I don’t think that’s a surprise to anyone. 🤣
We do need to up KB’s iron intake a little. She was on the lower end of the “acceptable” spectrum. Since Kensie seems to like eggs lately I’m going to attempt sneaking some spinach in there. 😉 I also got some tips on weaning and getting Kensie to drink normal milk. Kensie only nursed 3 times today!!!! She had Chipotle for lunch and even ate some guacamole! (She isn’t a fan of avocado or guacamole normally. You can’t even trick her into eating it.)

After her check up we had a quick nap and went to day 2 of her swim refresher! Her float was much better today and she was already back to dunking herself under water. 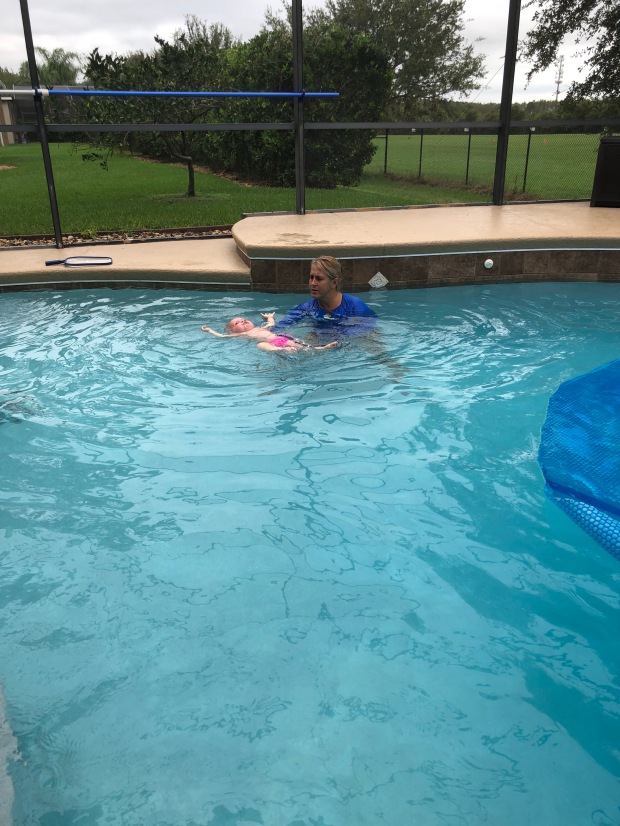 Once Kensie learned her rollback to float, she started leaning forward to stick her own face in the water as soon as Mrs. Heidi gave her the signal that she needed to take a breath. Such a goober.

Ever since Kensie started having these top teeth break through she’s been fine during the day but her sleeping at night has been rough. She was doing great sleeping from her dream feed until the morning; now she’s back to waking up 2-3 times for the past week or so.

I’m not sure if she will go back to sleeping better once these next two finally cut through or if we need to re-sleep train. Is that a thing? It’s about to be a thing. We are going out of town this weekend so I’m holding off until we are back since anything we retrain at this point will get ruined with the schedule being thrown off.

OH! And speaking of out of town, I bought a travel case for her car seat and a gate check bag for an umbrella stroller since the guys that pack up the planes are apparently careless and inconsiderate. So, if they’re good, I’ll post the amazon link.