KB had a great weekend and she’s officially taking it upon herself to wean off of pacifiers! We kicked off the weekend with another man down. 🤦🏼‍♀️ She’s now lost her elephant, duck, frog, giraffe, monkey and Lord knows what else. She’s gone from 9 or 10 to…2.

I was honestly frustrated at first because I tracked our steps 3 time and couldn’t find where she threw it and was thinking “she only has a few left and I really don’t want to buy another one”. Then, I realized she’s a toddler now. I was trying to figure out when I should wean her and she answered that one for me! Now I don’t have to take them away she just throws them out on her own. 🙄 So once they’re gone, good luck girlfriend. 🤷🏼‍♀️ 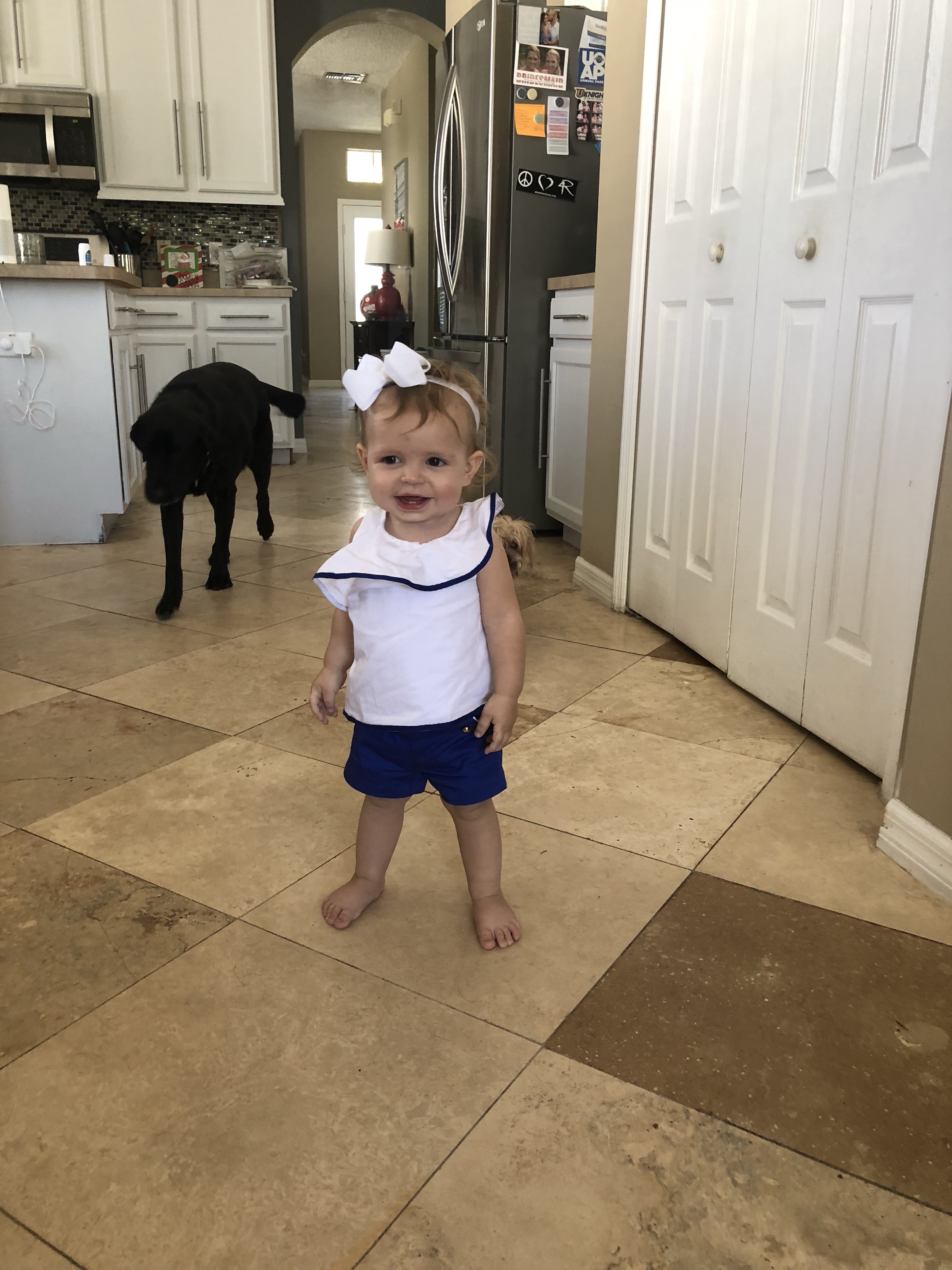 Other than tossing pacifiers, “entertaining” is probably the best way to describe this chick from our weekend. I found some super cute Christmas decor we needed and I asked Kensie what she thought. 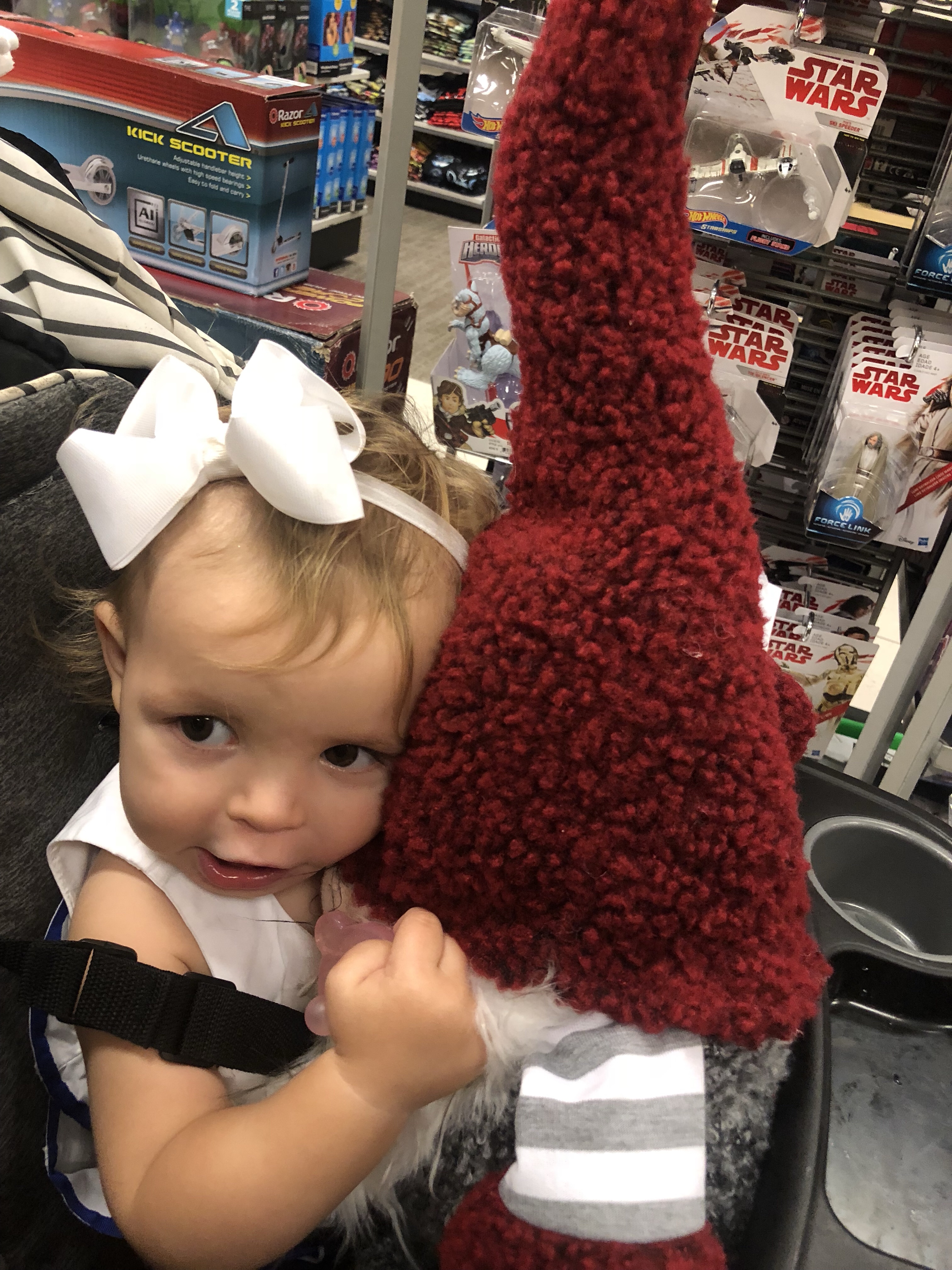 She hugged this Santa gnome the rest of the time we were in the store. Literally. The whole time. 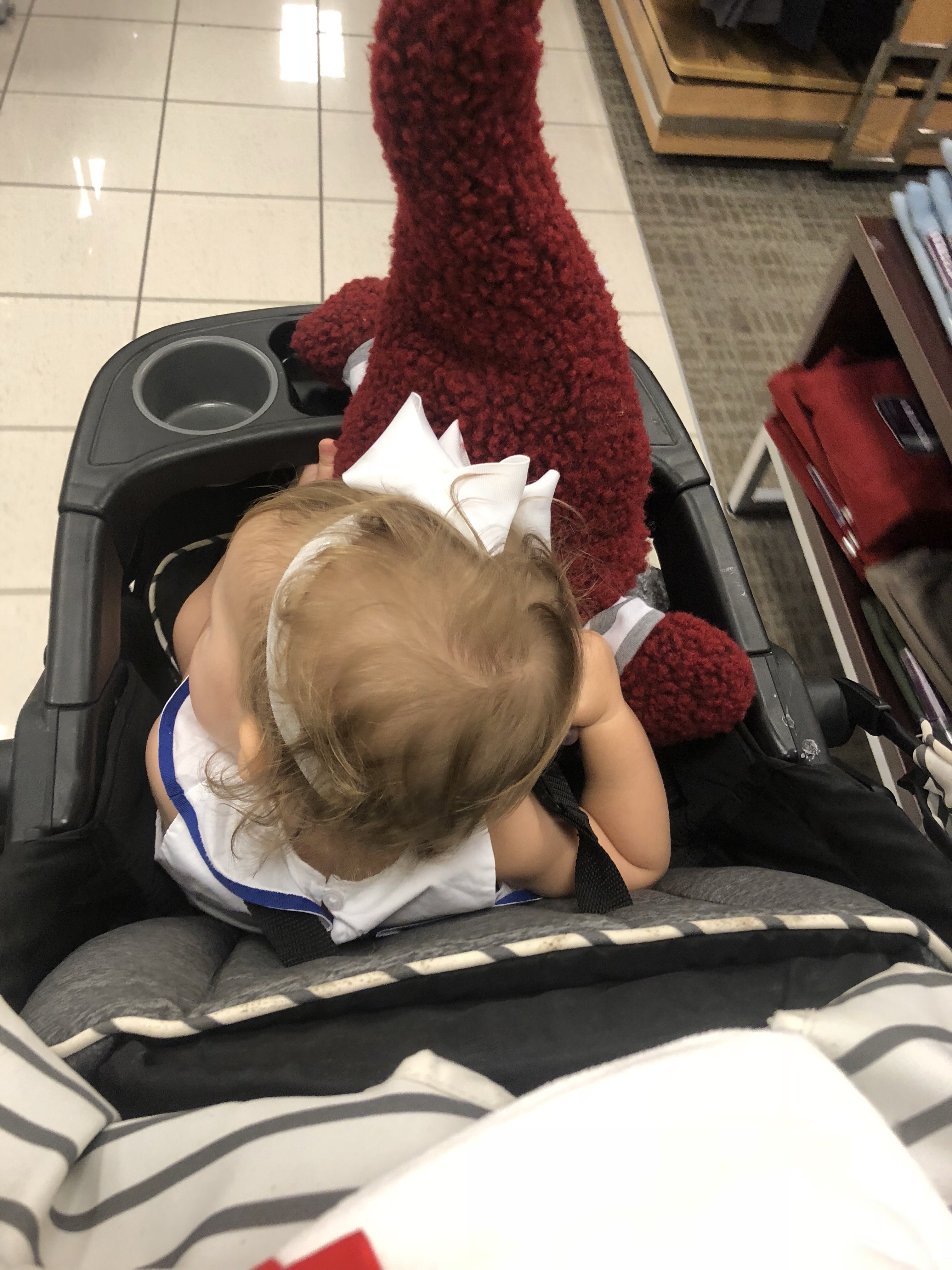 Friday afternoon K helped me coach while Daddy got his workout in. I couldn’t get a video because my phone was playing the music, but Kensie copied me all afternoon Friday. She’d follow me out back when the class was running and tried to follow their path and would look at them and clap and say “go, go!” 😂

As Daddy was trying to recover, she took it upon herself to provide those important post workout carbs.

I probably found it slightly more entertaining than he did. 🤷🏼‍♀️

Saturday KB came with us to watch her Knights WIN THE AAC CHAMPIONSHIP GAME!!! 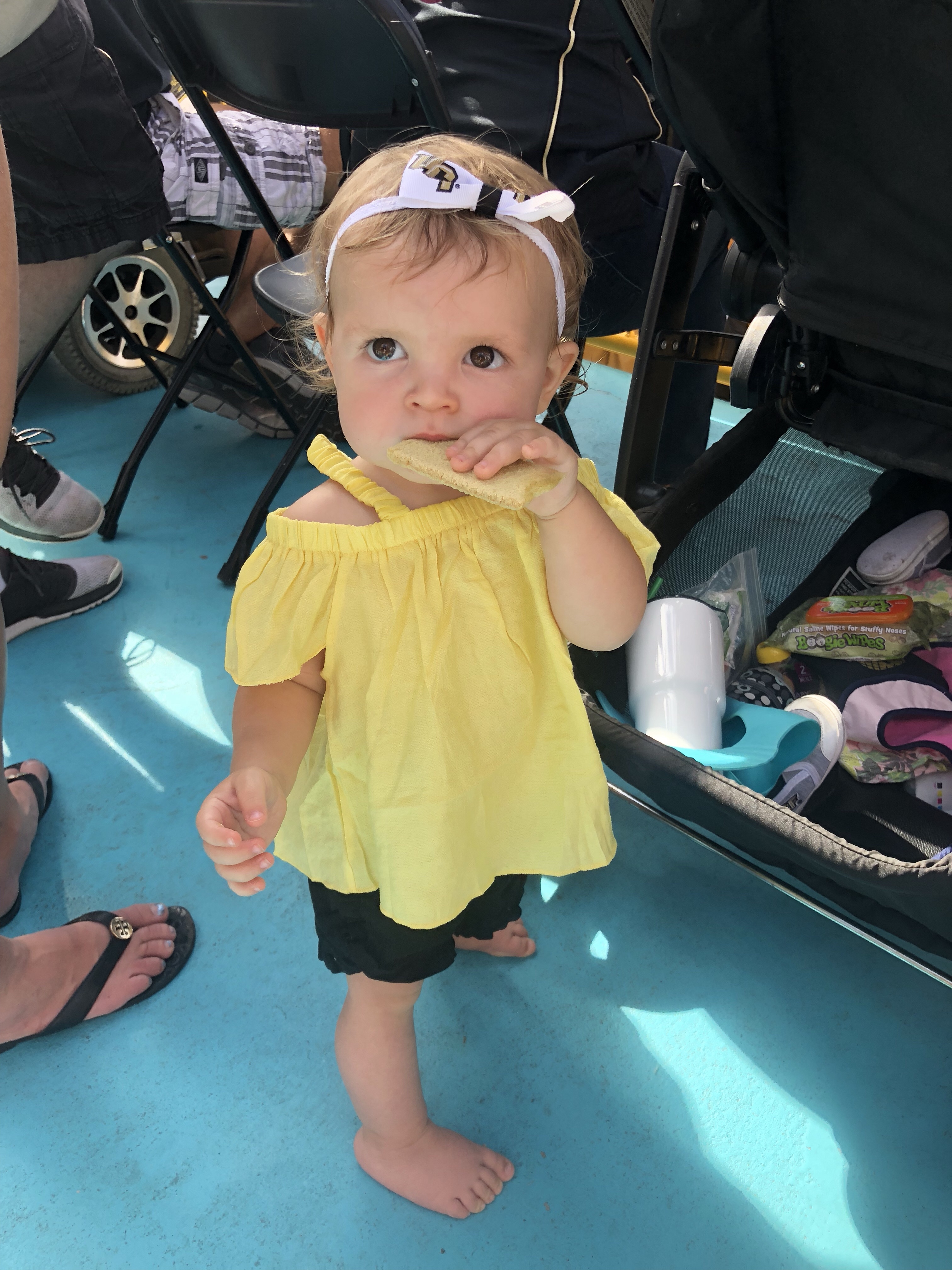 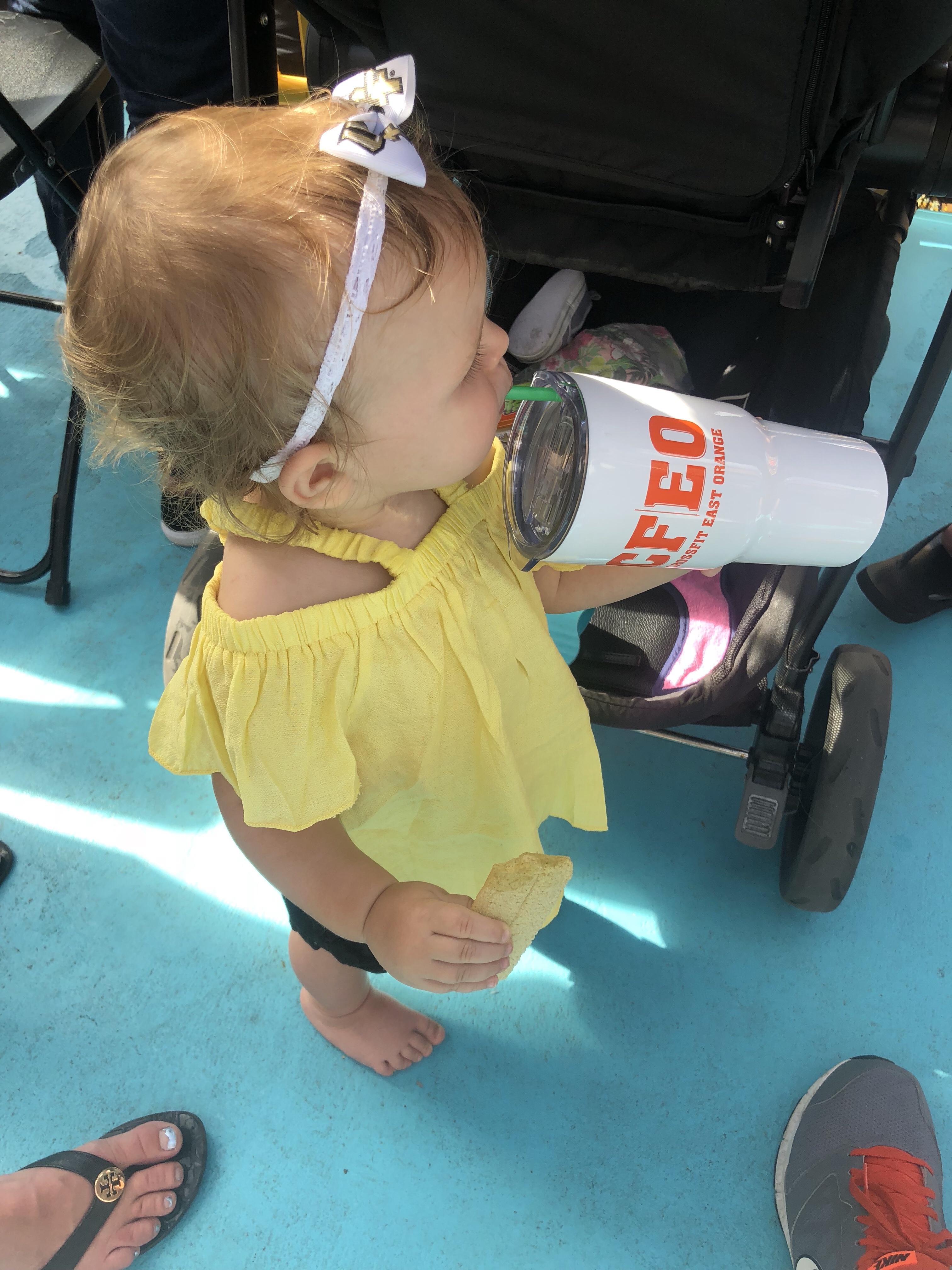 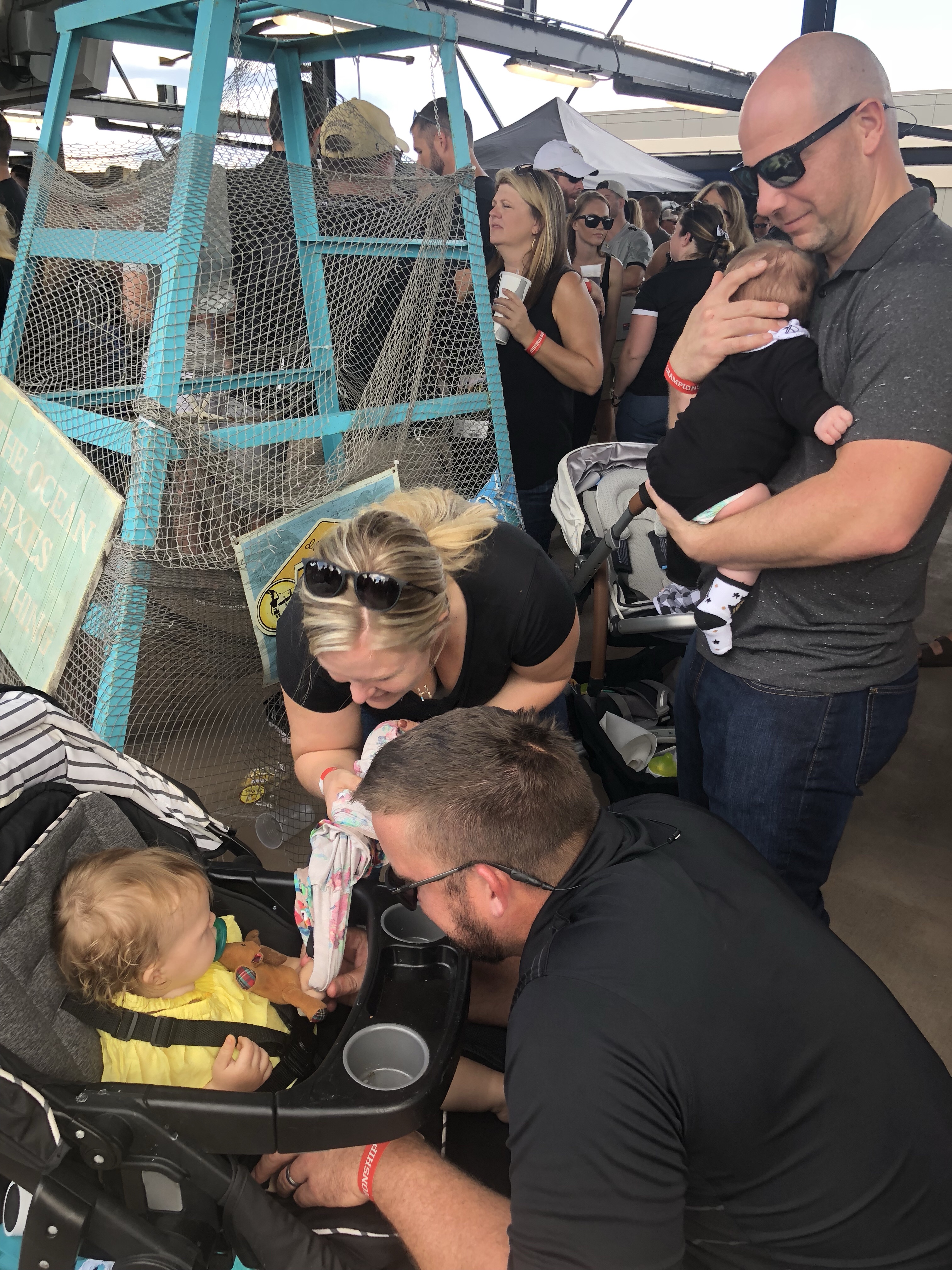 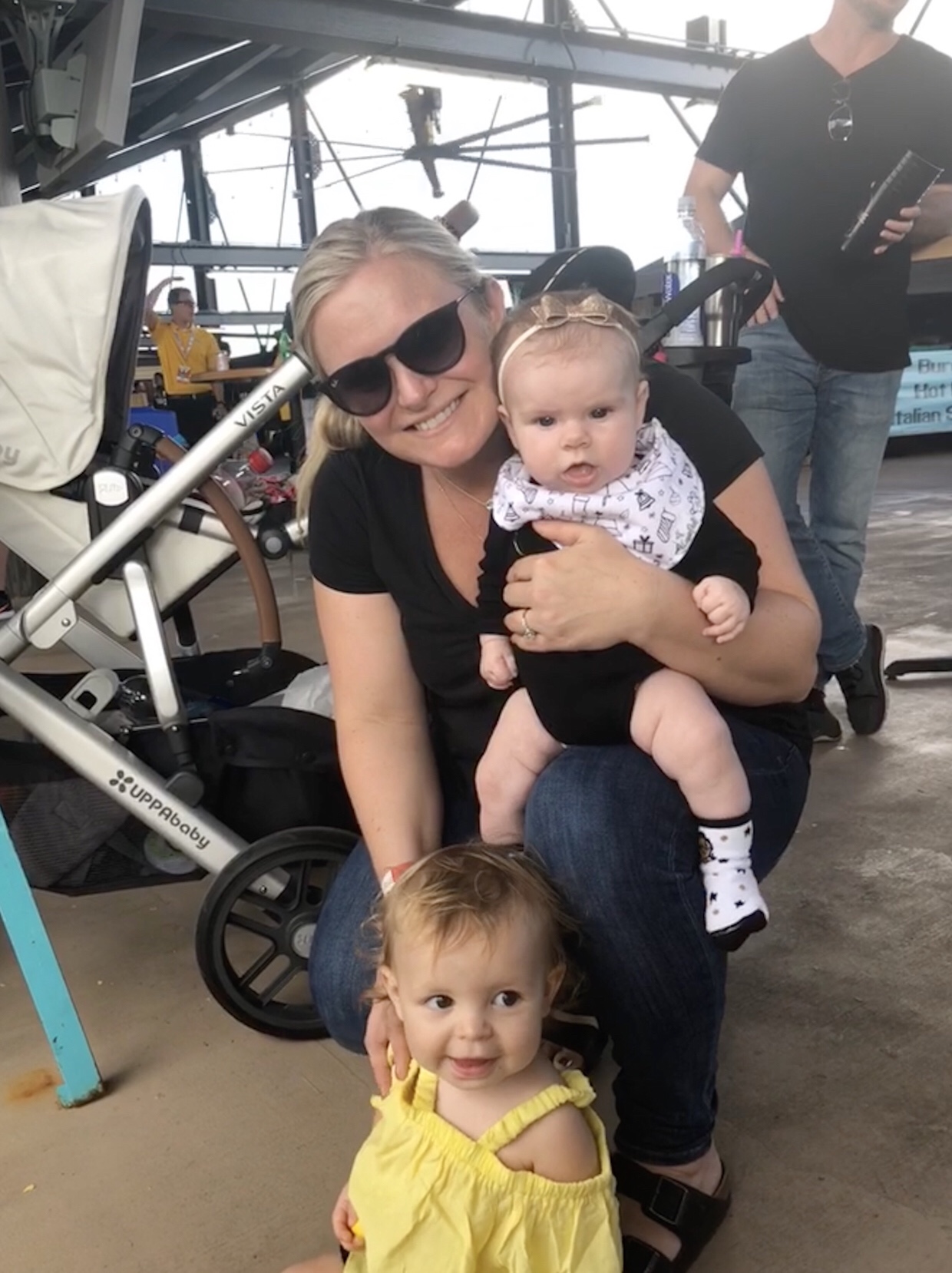 She had a blast and was so good the entire time! By some miracle she even took her afternoon nap!!! 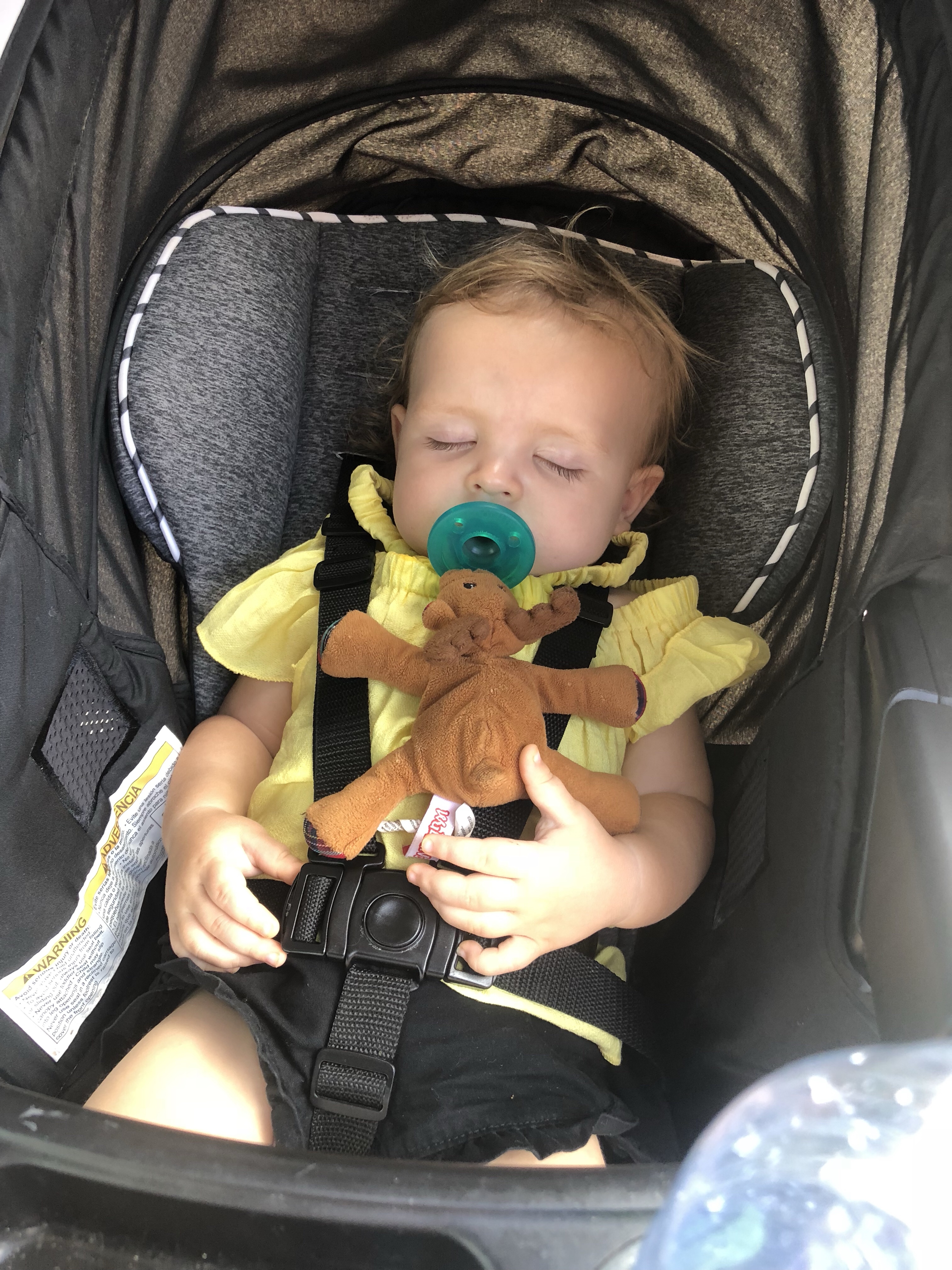 We were going to go to a Christmas event in our neighborhood Saturday night, but we were all pooped from the game so we stayed home instead. Well, not all of us were pooped. KB had a dance party.

Sunday Kens had to skip out on church because I didn’t want her spreading her stuffy nose germs to all the other kiddos in the nursery. As you can see in the photos/videos, she’s feeling completely fine. Other than an annoying runny nose, which I’m hoping is the worst of it, the cold seems to be on its way out.

KB impressed me once again today while we read her books! I was asking her to show me where different things were and she was able to point out a dog, star and the moon!!! I kept making her do it multiple times because the first few times I thought it had to be a coincidence. And of course every time I tried to get a video she just grabbed my phone away. I eventually got sneaky enough, sort of.

And this video I just think is hilarious. If you watch my Instagram story, you already saw it. She may be speaking in full sentences yet but she surely knows how to communicate what she wants. 😳😂