Not too sure where this week went…heck, or this year!!

We took our family Christmas photos this past weekend and I am SO impatiently waiting to see them. 😆

K was SO good (due to our incentive plan: smile and participate and you get to shop for a new toy 😉), so she got to pick out ANY toy she wanted when photos ended! (From Five Below, of course – I’m not dumb 😂).

I don’t want to give the complete wrong impression – she still thought running away and playing “hide and seek” in the Christmas trees was a good idea mid-shoot 🤦🏼‍♀️ but we can’t fault a 3 year old for wanting to play instead of pose and smile. 🤷🏼‍♀️

While Sunday was the best day (attitude wise) in a while, I wish I could say she’s been a sweetheart all week – but it’s most definitely not the case. Lol

She has her moments of pure defiance and I’ve lost my patience with her lately more times than I’d like to admit. Kens is way too smart for her own good and trying to parent the “me” out of her will in fact be the death of me. 😆

KB can manipulate situations and people better than some grown adults I know and I walk a fine line between being impressed and trying not to completely lose my shit on her. 🤣 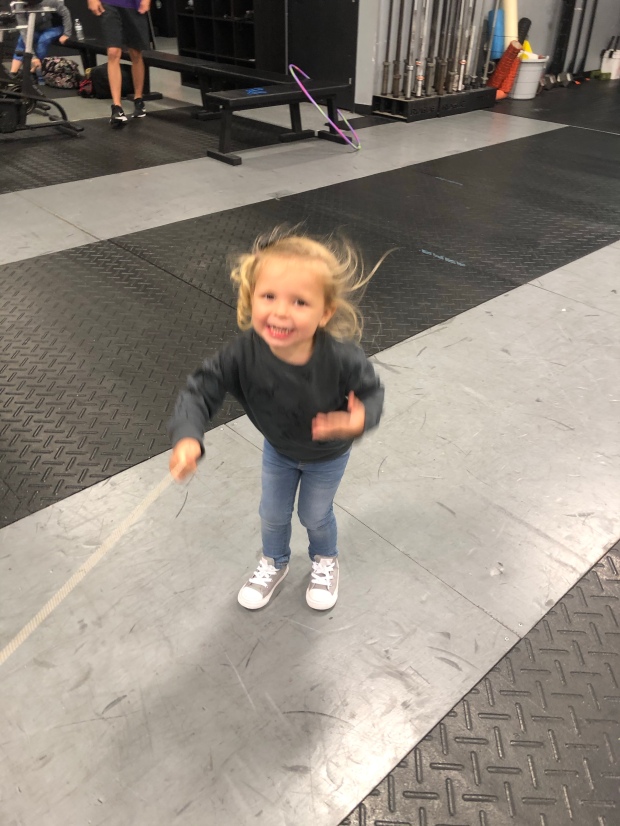 Kensie also knows how to work the “sweet” angle and turn her charm on in a split second. She’ll ask for hugs and kisses and pretend like you’re her best friend for a solid 20 seconds (or until she’s told “no” again)…and the fact that she grows up and grows more independent every single day, makes it even harder. I want to soak in her sweetness while it lasts but I don’t want her to get away with her BS. 🤷🏼‍♀️

Last week we had to leave gymnastics class because Kens wouldn’t listen or participate. She kept running out of class and saying “nana nana boo boo” and trying to get the coach to chase her. 🤦🏼‍♀️🤦🏼‍♀️🤦🏼‍♀️

She had a few warnings and I told her if she left class again we were going home. K decided to test that. So, we left. I may make a ton of “mom mistakes” but Chris and I try our best to not say anything we aren’t willing to act on and act on anything we say we will.

The good news? I think it worked! This week she made serious progress. She spent the first 20ish minutes sitting up in the chairs by me but long story short, she eventually joined class, listened to the coach, AND DIDN’T RUN AWAY ONCE! 🙌🏼

I can be pretty hard on her at times, but while we were eating dinner last night after playing play doh, she said “thanks for playing with me, mom” and my heart completely melted. 😭

Phew. I’m almost as exhausted from attempting to explain that as I am from trying to survive her attitude all week. 😂

Leighton had her first real food and homegirl is PASSIONATE about it. It wasn’t actually intentional (don’t jump down my neck, textbook moms 🙄) but she went AFTER my apple so I let her suck on it to see what she would do. Homie LOVES APPLES. 😯

L is always so calm and it’s extremely rare that she will cry, but she lost her ish when I took it a way and pitched a fit. 🤣😂

She was going in on that thing like she’s been starved. (Her cheeks and thighs can both confirm that isn’t the case).

We will soon find out if she has more of an appetite than her big sister does. 😆 (for those that haven’t always followed our blog, I swear Kensie would starve herself if it were an option…)

Hopefully I don’t jinx it, but Elle is the MOST content, happy and calm baby ever. It’s not hard to please her and anyone giving her attention usually gets a smile out of her. The hardest part (so far) is changing her clothes or diapers because she won’t hold still for half a second. 😆

I truly think God have us such a low maintenance angel baby in Elle because he knew the stage of life we would be in with Kens at the same time and we wouldn’t survive otherwise. 😂

Last night K walked in L’s room and said something to me and L just busted out laughing. Chris or I have YET to get her to laugh like this for us. Kens is the absolute only person that gets these belly giggles out of her. ❤️

They went on and on and if K as much as looked at L she would crack up. 🤷🏼‍♀️

She then wanted to “read sister a book” but that just turned into L trying to touch it and K yelling at her to stop it. 🤦🏼‍♀️

Regardless of the “hard” days – these girls are definitely worth it! ❤️