Whew! Life with KB has been one dramatic scene after another this past weekend. 😰 As soon as you feel like you’ve got the whole “momming” thing down, they grow up and throw a whole new challenge your way!

This weekend, Kensie would ask to eat and then as I’m getting her food ready, she’d have a COMPLETE meltdown. I would give her exactly what she asked for, and she didn’t ask for anything else, she’d just have a breakdown before she’d eat it. Every meal. Without fail.

Fun fact: I wasn’t allowed to touch the yellow bowl of oatmeal or she’d go ballistic. 😧

It is the strangest thing and I’m still not sure why it was happening. We went to a friends for dinner and I thought the distraction would help avoid a meltdown…nope. Still happened. My theories involve possible teething and/or her stomach was bothering her. (I’ll spare you details 💩).

They weren’t even “I want my way” temper tantrums. It was real, sad, sobbing and nothing I did made it better. Just had to let her ride it out…she’d stop, eat for a second, cry again for a second, repeat that once or twice, then settle down and eat. 🤷🏼‍♀️

She DID have lunch and dinner today without complete meltdowns, so I hope this is a thing of the past.

We are definitely in the battle for control stage and I’m trying my best to let her be independent, learn, grow and push limits while trying to balance the whole you can’t/won’t always get your way lesson. I’m sure I screw up 9 times out of 10, but she’s alive and happy so I’m sure we will all be okay. 😝

I pray for patience daily and I think that prayer is being answered in the form of raising a toddler. 😂 K tries SO hard to communicate with us. She has a decent amount of signs down and she’s pretty good and finding non-verbal (or at least minimally verbal) ways to tell us what she’s trying to, but there are definitely times it takes us longer than others to figure out. The day-to-day stuff is fine and then she throws in a new one and we’re lost. Ha!!! …Which turns into a tantrum on her end because she gets so frustrated. Poor Kens!

There was a post on Facebook the other day about 2 year olds and control and it’s a little sad but it was very sweet and a great reminder to have patience while our babes are in this learning stage and still can’t completely communicate their wants, needs and emotions. I’ll post it below for those that want to read it!

If only her communication skills were as on point as her mimicking skills…K has been on a ROLL with that lately. I don’t think there’s a thing at the gym that she doesn’t copy, and the photo below just speaks for itself. 😂

On to brighter topics: Kensie’s newest entertaining habit is wanting to wear her swim diapers…all. the. time. She takes the pack out of the closet and brings me (or Chris) one then stares at you and does a little shake/dance like “come on!” which we finally figured out meant “put it on me!” 🤣 So, we do. And she rocks it. 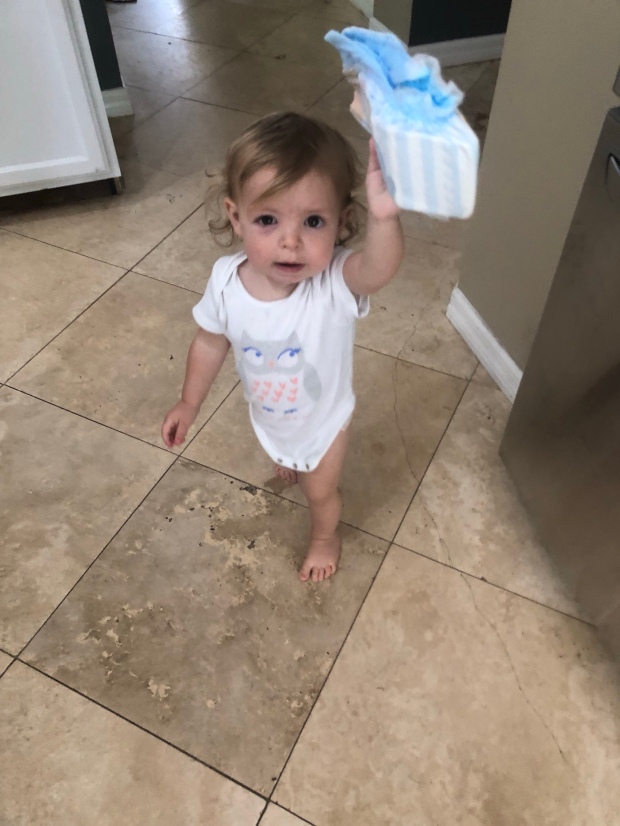 She also kept asking to go outside and both times sat and played in the dirt. I’m not a fan of dirt; but I’m sure the days of finding happiness in something as simple as dirt will fade all too soon. So, if that’s what floats your boat right now KB, you play with that dirt, boo.

Well, our good news of the weekend is the Nuby transition bottle my friend recommended seems to be working for us! It’s a “sippy cup” that as a normal bottle nipple as well as a sippy cup “nipple” (is it called that?) so once she’s used to her milk being in that cup, we switch out the mouth piece to the sippy cup and TA-DA! It’s supposed to work. We haven’t tried that part yet, but Kens has had her milk out of it since Saturday. She doesn’t drink it as quickly as usual, but she drinks it none the less! I’ll keep you posted – and thank you all for the support and suggestions!!! You’re much more helpful than that doctor was. 😉

Today I woke up and wanted to get dressed by myself but was told “No, we don’t have time, let me do it.”

This made me sad. I wanted to feed myself for breakfast but was told “No, you’re too messy, let me do it for you.” This made me feel frustrated.

I wanted to walk to the car and get in on my own but was told, “No, we need to get going, we don’t have time. Let me do it.” This made me cry.

I wanted to get out of the car on my own but was told “No, we don’t have time, let me do it.” This made me want to run away.

I’m being told it’s time to pick up, I know this because someone keeps saying, “Go pick up your toys.” I am not sure what to do, I am waiting for someone to show me….”What are you doing, why are you just standing there, pick up your toys…Now.” I was not allowed to dress myself or move my own body to get to where I needed to go, but now I am being asked to pick things up.

I’m not sure what to do. Is someone supposed to show me how to do this? Where do I start? Where do these things go? I am hearing a lot of words but I do not understand what is being asked of me. I am scared and do not move. I lay down on the floor and cry.

When it was time to eat I wanted to get my own food but was told “no, you’re too little, let me do it.” This made me feel small. I tried to eat the food in front of me but I did not put it there and someone keeps saying “here, try this, eat this…” and putting things in my face. I didn’t want to eat anymore. This made me want to throw things and cry.

I can’t get down from the table because no one will let me…because I’m too small and I can’t. They keep saying I have to take a bite. This makes me cry more. I’m hungry and frustrated and sad. I’m tired and I need someone to hold me. I do not feel safe or in control. This makes me scared. I cry even more.

I am not allowed to practice my skills of walking, pushing, pulling, zipping, buttoning, pouring, serving, climbing, running, throwing or doing things that I know I can do. Things that interest me and make me curious, these are the things I am NOT allowed to do.

I am 2. I am not terrible…I am frustrated. I am nervous, stressed out, overwhelmed, and confused. I need a hug.

One thought on “Toddlerhood”