The force was strong with this one this weekend; that force being gravity. Just shy of 13 months in and we had our first trip to urgent care today. 🤦🏼‍♀️ I’ll start this off by letting you all know that Kensie is a-ok. 👌🏼 She’s got quite the hard head. Or maybe a soft head that cushion the falls. 🤷🏼‍♀️ You get the idea.

Saturday night was Chris’ company anniversary party. Kensie had a BLAST. She stood in her chair and ate tortilla chips for almost an hour. By ate I mean played with them in her mouth for a while and took them back out. She did swallow some of them. It was a huge mess but hey, she was happy!

K was also loving the tunes and kept dancing in her seat. After a while a few of the little girls were running around on the dance floor and Kens really wanted to play with them. She started strutting her stuff all over and watched them run back and forth. The floor had a tiny little ramp on the sides.

While Kensie was busy cheesing and making friends, she took a stumble and her head hit the side of the chair. 😦

Half of me thought “of all places of course it’s the one part sticking out”. The other half of me was so thankful she didn’t completely split her head open.

Kensie recovered quicker than I did. I still feel bad for her. Poor babe. She wouldn’t let me hold an ice pack to her head but luckily the swelling went down rather quickly and now she’s just got a pretty little bruise.

Today she decided to top her goose egg from last night. K was playing on the couch like she always does. She knows how to get down by sliding on her belly until her feet touch. She does not know how to get down by falling backwards. Kensie had crawled over to the chaise part of the couch where there’s no armrest. She lost her balance, fell backwards and hit her head on the corner of the wall. Introduce: goose egg number 2. She cried for a minute and I checked her pupils and she seemed fine. No more than 60 seconds later she wanted to get down and play again. I sat down with her for a second to see if i could tell where she hit and that’s when I discovered the huge knot on the side of her head. 😔 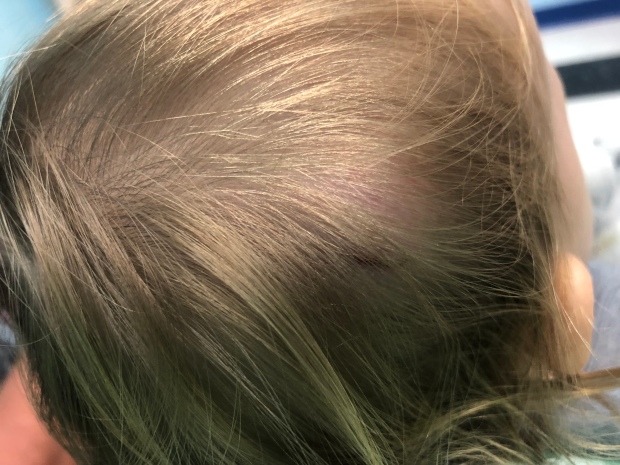 It’s hard to tell in the photo, but there was a little blood line from where the corner hit and the rest was swollen and blue. She wasn’t bleeding. Even though she was acting normal, the lump looked pretty bad and paired with the face smack from last night, we felt a little uneasy.

So, yeah. That’s how we ended up taking our first trip to Children’s Urgent Care. Sunday Funday!!! Kensie checked out perfectly fine and was cleared to go run around and fall some more. 🙄 Will it affect her head shape if I make her wear a helmet all day? I’m considering it.

As for some good news…on Friday I figured out why Kensie wouldn’t take her bottles and we are back in action! She was using a size 2 nipple and it was coming out kind of slow, so I bought the next size up. Mistake. I should’ve known. “If it ain’t broke, don’t fix it!”

The new ones were too fast and she didn’t like how much came out so she wouldn’t drink it. I put the size 2 nipple back on and boom – she’s chugging her bottles again. Even 100% whole milk, while it’s cold! Score!!! Back to the chug life.

Kensie even ate a whole normal breakfast for me Saturday morning. We had oatmeal and a banana and applesauce and guess what?! WE MADE IT THROUGH OUR FIRST MEAL WITHOUT HER THROWING ANYTHING ON THE FLOOR! K was a great eater this weekend for all of her meals. She’s finally starting to figure it out! And for my momma friends still breastfeeding – oh man it’s a whole new world. 13 months later I had forgotten what freedom felt like! I was able to go get my nails done and run some errands and take some alone time Saturday afternoon while Chris hung out with K. It was worth every second of the last year, but since I’ve been feeling guilty about stopping it was nice to feel one of the “perks” to being done!

Before all the drama of the weekend kicked in, Harper and Riley came to play with us Friday morning! They had so much fun playing together and Riley even took Kensie for a ride in her car. Since she’s too small to drive it she just gets her boyfriend to drive her around…foreshadowing? 😯😜

Overall we’ve had a pretty good weekend, despite the Great Fall(s) of 2017. At least I hope it’s the great ones. I’d really appreciate her not outdoing herself on this one. As you can tell, K was still happy as could be and barely phased by her lumps and bruises and has no intentions of slowing down!