This post got put off last night since Chris and I were celebrating our 2 year anniversary! And by celebrating I mean getting home from the gym at 8:45, putting Kens in bed at 9, and eating Mindful Meals while drinking champagne from a wine glass.

Kensie made up for sleeping until 8:20 on Sunday by waking up at 6:45am today and proceeding to completely exhaust me. (However, she REACHED FOR ME FOR THE FIRST TIME TODAY! So it was worth it. ;))

I had a nail date with Ashley and at that point, Kens had been up for 4 hours with no nap. She didn’t care. She talked the ENTIRE time we were in there. And by talk I mean half yelled, half pterodactyl screamed the whole time.

She continued her conversation with herself at lunch with Daddy and wanted to be part of the action. 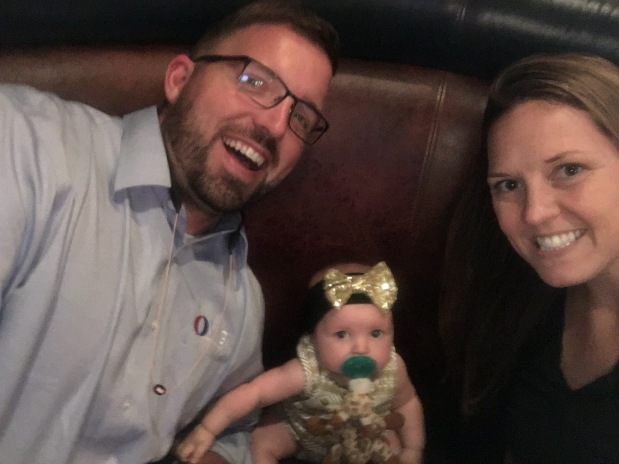 She must have been excited because he brought us both flowers!


After lunch K talked about half of the ride home then FINALLY fell asleep.
When we got to the gym Kens became a stage 5 clinger. She wanted nothing but to be held. The. Whole. Time. And seeing as I was there for 4 hours, that’s a lot of holding. I put her in the playpen so I could workout and after about 5 minutes she started screaming bloody murder. Good thing the music was loud enough that most people couldn’t hear her. 🤦🏼‍♀️

I always heard people say “when mom’s are with the baby all day dad walks through the door and you just want to hand them over and run”. I’ve honestly never felt that way…until today. Chris walking in was like the heavens opening up. “TAKE HER! PLEASSSEEE TAKE HER!”

I was supposed to complete rowing intervals after my workout. I didn’t want to do them. But I did them just so I could hand Kensie off and have 10 minutes of sanity. 🤷🏼‍♀️

On an AWESOME note though, KENSIE REACHED FOR ME FOR THE FIRST TIME! I was exhausted and I’ll admit a little annoyed that she wouldn’t just play for a little while so I could coach. When she started yelling at one point I walked over and she reached up for me!! She’s sort of lifted her arms for a while but not really “reached”. Today, she did! And when Rob walked over, she leaned over and reached out for him! It was the sweetest thing ever.

Just when I started to think “this vacay might actually be a nice break after today” she does something like that and completely melts my heart and makes me not want to leave all over again. 😪